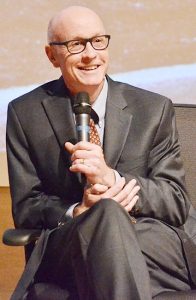 Dan Barry is a longtime columnist and reporter for The New York Times and the author of four books, including the newly released “The Boys in the Bunkhouse: Servitude and Salvation in the Heartland.” This critically acclaimed book tells the story of dozens of men with intellectual disability who spent decades working at an Iowa turkey-processing plant, living in an old schoolhouse, and enduring exploitation and abuse – before finding justice and achieving freedom.

As the “This Land” columnist for the Times, Barry traveled to all 50 states, where he met the coroner from “The Wizard of Oz,” learned the bump-and-grind from a mostly retired burlesque queen, and was hit in the chest by an Asian carp leaping out of the Illinois River. He has since recovered — though the condition of the carp remains unknown.

He has reported extensively on many topics, including the World Trade Center disaster and its aftermath and the damage to the Gulf Coast in the wake of Hurricane Katrina. He has also been the City Hall bureau chief, the Long Island bureau chief, a sportswriter, a general assignment reporter, and, for three years, the “About New York” columnist – all for the Times.

Barry previously worked for the Journal Inquirer in Manchester, Conn., and for The Providence Journal, where he and two other reporters won a George Polk Award for an investigation into the causes of a state banking crisis. In 1994, he and the other members of the Journal’s investigative team won a Pulitzer Prize for a series of articles about Rhode Island’s court system; the series led to various reforms and the criminal indictment of the chief justice of the state’s Supreme Court.

Barry’s other honors include the 2003 American Society of Newspaper Editors Award for deadline reporting, for his coverage of the first anniversary of Sept. 11; the 2005 Mike Berger Award, from the Columbia University Graduate School of Journalism, which honors in-depth human interest reporting; and a Sigma Delta Chi/Society of Professional Journalists award for column writing in 2010. He has been nominated as a finalist for the Pulitzer Prize twice: once in 2006 for his slice-of-life reports from hurricane-battered New Orleans and from New York, and again in 2010 for his coverage of the Great Recession and its effects on the lives and relationships of America. In 2014, Barry was awarded both the Katherine Schneider Journalism Award for Excellence in Reporting on Disability, from the Walter Cronkite School of Journalism and Mass Communications, and the Best American Newspaper Narrative Award for his story about the bunkhouse men, upon which his new book is based.

Putting all this in proper perspective was a fifth-place award for feature writing from the American Bowling Congress. The certificate misspelled his name.

Barry has also written “Pull Me Up: A Memoir”; “City Lights: Stories About New York,” a collection of his “About New York” columns; and “Bottom of the 33rd: Hope, Redemption, and Baseball’s Longest Game,” which received the 2012 PEN/ESPN Award for Literary Sports Writing.

Born in Jackson Heights, Queens, Barry grew up on Long Island, where he worked as a ditch digger and itinerant delicatessen clerk before getting a job in journalism. He now lives in Maplewood, New Jersey, with his family.